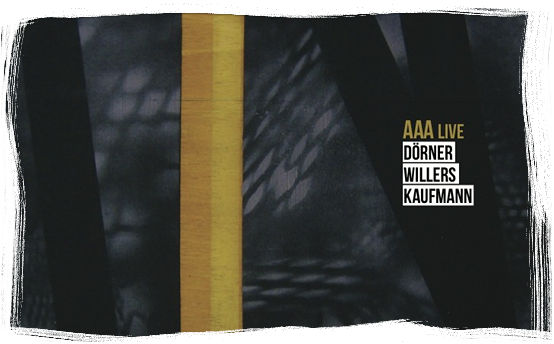 mixed and mastered by alexis baskind

“[…] taking free form as their starting point, the german improvisers who make up .aaa come up with nothing as concrete as a melody on the instant composition “denotationstrat” which at 36 minutes take up the largest chuck of this live cd; the three shorter tracks are a chance for each man to express himself in a solo context. as on the french session, trumpet, played by axel dörner, and piano from achim kaufmann are both represented. rather than drums though, the third part of this triangle is andreas willers, who plays acoustic guitar and electronics. charter members of berlin’s unadorned echtzeitmusik scene, each musician here also has experience playing vigorous free jazz. however the focus of “denotationstrat” is on scene-setting and tensile textures not story telling. kaufmann and willers supply the physicality with a percussiveness that arrives from melding sharp, squeaky chordal tones. additionally, electronic pulses wriggle and hiss as a secondary ostinato; never in the foreground, but always present. meantime dörner’s distinctive exposition is segmented among crying lip flutters plus air forced through the horn’s body tube. occasionally his narrative intersects with orderly chord sequences from kaufmann or positioned strums from willers, but mostly the interaction is like that of solitary sentries on a disputed border: self-sufficient, but able to join with the others in a split-second. vividly, but maintaining an understated narrative, the three reach a zenith of unrestricted pressurize on the final sequence as blurry guitar flanges, buzzing brass vibrations and solid key pumps overlap then dissolve, creating noticeable respite and a precise ending.
[…] although there may be some who feel each of the trio members here could have let himself go a little bit more with some sloppy frenzy, that’s like criticizing a cat for not acting like a lion. each session is an appropriate summation of how to create up-to-date brass-centred improvisations.”