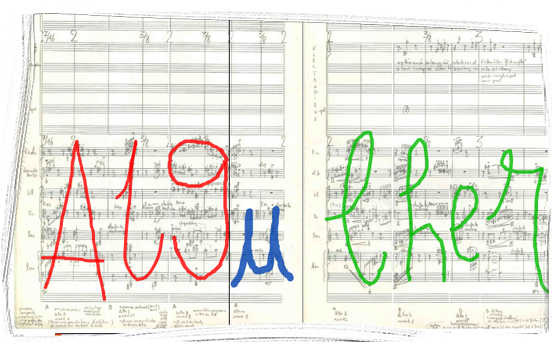 apocalypsis: piece for 4 singers and orchestra composed by philippe leroux

“apocalypsis is elaborated from the corpus constituted by voi(rex), composed in 2002 for one voice, six instruments and electronics. this elaboration is based on the analysis of the sound material (sound files and performance recordings, which are used in the new piece), on computer tools specifically designed for this project (patches made with the software environment openmusic), on symbolic data produced by those tools and on the spatialization of electronic sounds. apocalypsis also requires the genetic and structural analysis of the composition methodology. the analytical comments on the composition are used to generate the libretto of the new piece.

the material and operations of apocalypsis constitute a natural follow-up of those of voi(rex). the form of the new piece is provided by the chronology of the compositional operations of the first one. despite this, although voi(rex) and apocalypsis are closely related, seem extremely dissimilar to me, both in terms of sound and form. first, thet have only a limited amount of common sound material. second, they are build using very different ways. but above all, the et elles sont construites de façon très différentes. mais surtout, the conception of the one based on the other one is influenced by what only belongs to each single piece: the degree of freedom that the composer finds even within the most rational framework. however one can speculate that the listener will recognize the “hidden backgound” pertaining to the fact that both are works of the same musician.

the electronics of apocalypsis is mostly based of a computer using the software max/msp. The program is in charge of the real-time processing like enveloppe following, granular synthesis, delays, filtering, frequency shifting, reverberation, spatialization, etc… and also plays the sound files triggered by one of the singers.

the software that were used for the conception of the piece are openmusic for the harmonic, melodic and rhythmic construction, audiosculpt for the representation and the analysis of some vocal phenomena and the cleaning of some sound excerpts, max/msp for the simulation of the real-time processing.”