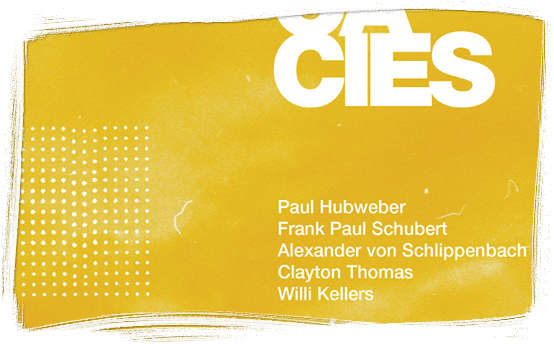 “chief among the protagonists, veteran pianist alexander von schlippenbach channels monk by way of cecil taylor as his nagging comping and muscular clusters adds an architectural solidity to the venture. trombonist paul hubweber proves expressive and full of ideas, veering between broad smears and muted groans. in his imposing lines, he often plays the straight man to saxophonist frank paul schubert’s voluble iterations. less of a noise player than some, the reedman’s narrative proceeds in bursts of abstract but not dissonant emphasis. on bass clayton thomas offers a sturdy presence, varying his skittering pizzicato with bow work which shimmers and swoops, while drummer willi kellers lays down a rumbling percussive carpet and punctuates in conversational flurries.

one can only marvel at their collective skill, as they maintain an unbroken flow of ideas from which new directions emerge and progress via an intuitive logic. schlippenbach constantly fuels the unit’s internal dialogue by devising motifs which the horns can pick up if they choose. when they do phrases zip around the group, forming transitory touchstones amid the uncharted journey. the reverse happens too, notably when schubert alternates breathy long notes against an urgent staccato, picked up as a riff by the pianist to energize the ensemble during the latter stages of the near 50-minute “come to blows.”

passages of garrulous interaction where all five hold forth are leavened by more open transparent sections of spare meditation. one such interlude of unaccompanied piano in the extended title cut morphs into lurching barrelhouse. there’s obviously a strong connection between the saxophonist and the pianist, in evidence at various points in this performance. here schubert supplements the rolling locomotive vamp with a hoarse overblown alto saxophone squawk to forge one of the most exciting episodes in the set. further confirmation of deep listening arises later in the same piece when hubweber’s boppish patterns prompt a sequence of on-the-fly syncopation in which the horns and rhythm gloriously interweave.

it’s a set that rewards those with the stamina to stick with the twists and turns of the long form. ultimately what you get is just the sort of consistent quality you would expect from such masters of the genre.”

John Sharpe, All About Jazz