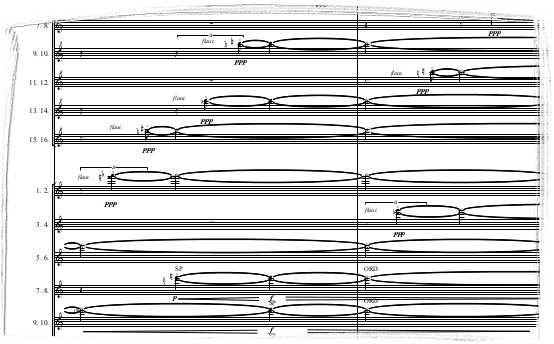 first performed on the december 1st, 2013 at the auditorium rainier III in monaco, by the monte-carlo philharmonic orchestra directed by dima slobodeniouk.

“the main idea for this composition was inspired by a set of snapshots obtained by means of the “hubble” telescope. following hitherto unfathomable laws of nature, orderly stellar systems are formed from clouds of gas and nebulae, emanating powerful currents of light and energy.

these galaxies and stellar nebulae demonstrate color spectra of fantastic beauty and an astonishing variety of forms: ellipses, spirals and innumerable irregular structures. appearing to be immobile to the lay observer, in reality, following the law of the red shift, discovered by astronomer edwin hubble, these hyper-gigantic formations move away from each other with an incredible, continuously increasing speed. this results in the calm grandeur of the universe which in reality presents a monstrous energy of constant motion, one that simultaneously is creative and destructive.

my composition expresses a peculiar sound metaphor of hubble’s idea. out of an amorphous mass of the “sound nebula” the fractal pitch structures gradually crystallize. in a similarly gradual way the “syntactic gravitation” forms large-scale phased periods. the dramatic play of matter and energy, the changeover of one to the other, leads to a constantly accelerating expansion of the sound space.

the principle of the red shift — the visual indicator of the grandiose expansion of the universe — is imprinted in the musical texture, not only metaphorically, but also structurally. in the formation of the composition’s parameters of sound, the idea of phased shifts is reflected in shifts of pitches — the intervallic displacement of adjacent sound fractal chords — and shifts in the frequency domain — mutations of the timbre.”