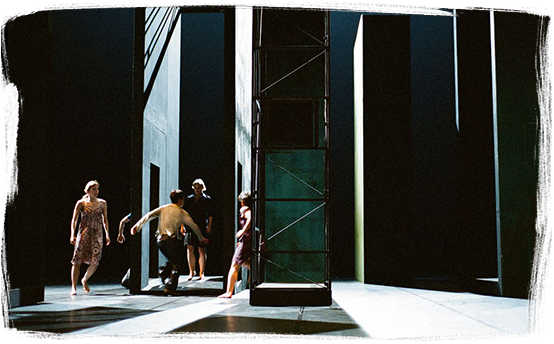 the performance les arpenteurs is born from a desire to unify dance and music, musicians and dancers, in a profound manner. fruits of the meeting between artists who, for this event, initiate work methods in an attempt to cross their respective fields even further, this performance brings to the stage seven dancers and six percussionists. it is the occasion for each participant to feed his or her creativity in the universe of another. michèle noiret, choreographer of desire, of intimacy, of the imaginary and the troublesome, has, since her work with stockhausen, experimented with the narrowest connections between sound and gesture, before liberating movement in a dance-cinema that thrusts the spectator to the heart of its choreographic characters. françois paris, composer with a repertoire rich with images, poetry and technique, develops a music that plays with timbre, into which sounds seems blown infinitely small in large acoustic spaces. he is one of the rare composers to conjoin the ensemble of percussion instruments with technology, in a constant rapport with images. in this case, he works with les percussions de strasbourg directed by jean-paul bernard, in which the instruments are as surprising as they are singular and beautiful. the set by alain lagarde suggests different architectures whose transformations will allow the musicians and their instrumental park to appear and disappear, as well as the dancers, suggesting variations on space throughout the performance. each participant, in such a way, hopes to release an expressive unity that invites our imaginary to leave that which limits it : the « recognition of territory ». dance and music have since the beginning of time been indivisible. here, their union will once again be celebrated in a performance in which choreography exhausts its images in the universe of the city, escapades, solitudes and crowds. metaphor that makes the dancers and the percussionist an allegory of social body, les arpenteurs meet, appear and are erased in an imaginary city, a city born from thought, in which the paths of some magnetise the paths of others. in the same manner as the artists of this project approach the field of the others with differing results, the choreographic characters evolve through meeting in their search for a clue, an object, a trace that will show them what their destiny is in this city… acity that never reveals itself in its entirety, but only by fragments, by translucent portions, by singular irreparable perspectives. the areas rub off on the beings, who in turn transform space.