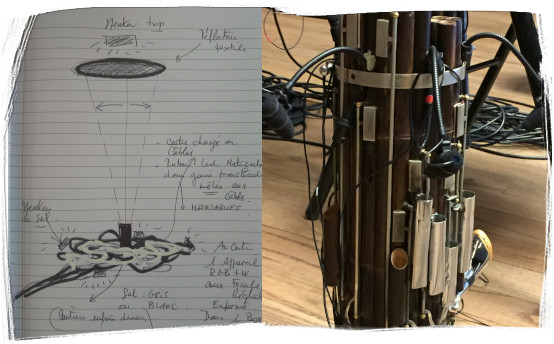 a forest of pipes

the aesthetic goal of this project is to metaphorically set the listener within the 37-pipe sheng, surrounded by its pipes.

the electronic extension of the modernized 37-pipe sheng (based on traditional mouth organs) is at the center of this project, which is the performance part of the sheng! research project, coordinated by TPMC – Tout pour la musique contemporaine, implying among others the research labs and institutes IReMus, IRCAM, Sorbonne Université, Inalco, and actively supported by GMEM (Marseille), Césaré (Reims).

a few words about the sheng and the 37-pipe sheng

the sheng is not one instrument but a family of instruments, which constitute some of the world’s oldest free-reed instruments. the sheng has a history of over 3,000 years: its ancestors (he and yu) were recorded in oracle bone scripts in the 15th century bc as well as in classifications of chinese instruments in historical records from the west zhou dynasty (c. 1100–771 b.c.). the sheng as such was first mentioned in the 7th century bc. it has played an important role in the development of chinese music culture, including the whole of southeastern asia. its korean version, the saenghwang (생황), is still used to play court music from the song dynasty. it was introduced in japan through the korean peninsula in the 7th century (its japanese name is shō – 笙), and is still used to play gagaku music and some court music from the tang dynasty.

This phase has been presented in an online seminar at IRCAM.

An improvisation performed during this residency can be heard here:

A short excerpt of the performance can be heard here.

This residency will finish with a public performance on January 26 in GMEM.

See more information on the GMEM’s website (in French)

Part of the FARaway festival.