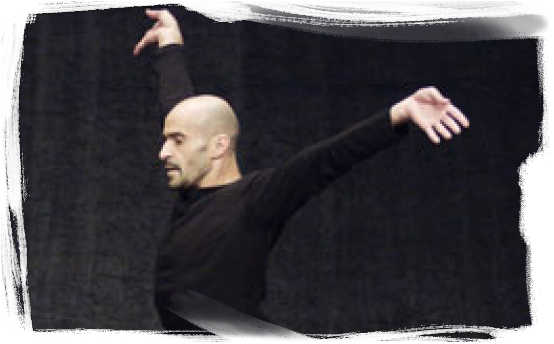 live performance for a dancer and 6 musicians

performed by the ensemble intercontemporain conducted by jean deroyer

(double points plus): + is the second part of a project initiated in 2004 in dortmund by the swiss composer hanspeter kyburz and the italian dancer and choreographer emio greco. with six musicians and one dancer, a lighting control room, a sound spatialization device, a video system and live electronics, this truly multimedia and interactive work is the result of a collaboration between two creators who are both keen on formalism and open to chance. emio greco’s art, which received classical training from william forsythe, impresses as much by its structural rigour (as evidenced by a body mastery of prodigious virtuosity) as by its ability to instill madness and excesses.

in a similar way, hanspeter kyburz likes, in his music, to start from established structures, from modelled frameworks, in particular with the help of computer, in order to unleash processes that then evolve in an apparently spontaneous, organic way. in (double points plus): +, music and dance are in immediate correspondence, guiding each other. emio greco’s body, carrying sensors, allows him, through his movements, to influence the pitches and dynamics of electronic sounds; at other moments, he reacts freely to the schemes proposed by the instrumentalists.

based on alternating musical and choreographic nuclei, music and dance maintain a close relationship of coincidence, they move forward together, freely and openly, describing a time that is none other than that of representation.