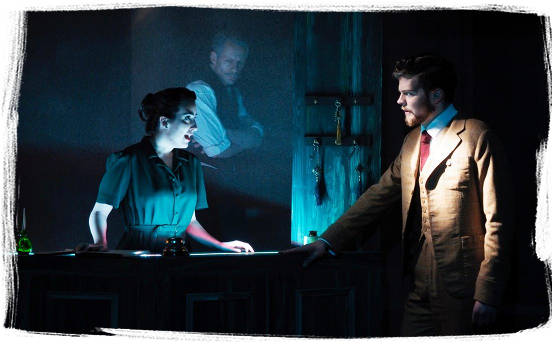 ibretto by juan lucas from a text by albert camus

le malentendu tells the story of a man who after a long sojourn abroad, returns incognito to his family home, unaware of the fact that his widowed mother and sister offer rooms to travellers which they then murder. they both act with routine, seeing those crimes as a way of life: “habit begins with the second crime. just as something else ends with the first.” the women fail to recognise him and so, inevitably, he shares the fate of other travellers and dies at their hands.

panisello’s opera unfolds on several levels. apart from the theatrical and operatic drama, he sets the verbal layer of the text in an innovative way: its grammar, syntax, prosody, and extraverbal aspect of the words, deriving elements of instrumental technique and music form from the nature of the language. language is thus treated as a source of material not only in terms of semantics, syntax, and prosody, but also in an abstract and symbolic way, which translates into the composition’s structure and texture. the electroacoustic processing of sound, too, thoroughly deciphers and transforms the work’s text. the objective is to create a parallel, integrated but independent discourse. the electroacoustic layer was developed in cooperation with sound engineer alexis baskind of the centre national de création musicale (cirm) in nice and includes both a layer recorded on tape and custom-built electronic instruments, controlled from the keyboard in real time. the performance of the opera thus requires the participation of a sound engineer and technician. le malentendu opens with a prelude, which presents the rhythmic and melodic patterns that characterise each of the five characters; they recur consistently throughout the opera. the prelude ends with an electronic “miniopera,” which in three minutes presents a condensed version of the plot that is then fully developed over a half-hour.

from that moment on, the opera’s structure follows the plot, alternating scenes, simultaneous scenes, and interludes. scenes present the successive situations of the drama, while interludes are symbolic representations of the characters. even in the interludes, however, language plays an essential role, in that characters, gestures, and related musical motifs are derived directly from words and utterances, determined by the number of syllables, emphasis, rhythm, flexion, and so forth.

in terms of compositional technique, le malentendu follows a trend explored by panisello since 2004, based on “polysystematic matrixes,” as the composer terms them. each such matrix maps the intersections of mutually related systems so as to generate a potential net of harmonies, melodies, scales, and modulation patterns unique to each work.

in its treatment of time, le malentendu is a summary of panisello’s earlier experiences with various elements of time organisation, such as “pulsation,” “micropulsation,” the use of “patterns” (understood as horizontal polymetric structures resulting from juxtaposing changing fast-pulsating metres), hockets, and other structures ranging from organic repetition to “rhythm” (understood as a free, arbitrary selection of basic time units).

undoubtedly, it is a work characteristic of panisello’s style. it reflects the composer’s vast experience and knowledge of modern musical repertoire. at the same time, it is an original contribution to his meticulous output.

le malentendu was premiered at the experimental centre of the teatro colón in buenos aires on 7 april 2016. apart from a concert performance at this year’s warsaw autumn, the opera has been staged at the neue oper in vienna and the teatro real and teatros del canal in madrid.

casting of the first performance in buenos aires